The Nikkormat is one of those iconic cameras that always comes to my mind when I think of a SLR, and when I see a Nikkormat the first image that crosses my mind is Dennis Hopper, as the photojournalist, in an "Apocalypse Now", covered with Nikkormats, that greets the Captain Benjamin L.Willard (Martin Sheen) on his arrival to the hideout of the Colonel Walter E. Kurtz (Marlon Brando).


The Nikkormat was intended as a back-up camera for professionals and also a more affordable camera, than her sisters the F and F2, for the serious amateurs.

This series of cameras were manufactured from 1965 to 1978 by Nippon Kogaku K. K., that later became Nikon Corporation.
The chronological line was FT, FS, FTN, FT2, FT3, EL and ELW.
The different models corresponded to an evolution in features, except for the FS, that was a FT striped of the light meter.

My example is a FTN from around 1967, the later production models had plastic coverings of the film advance and self timer levers. 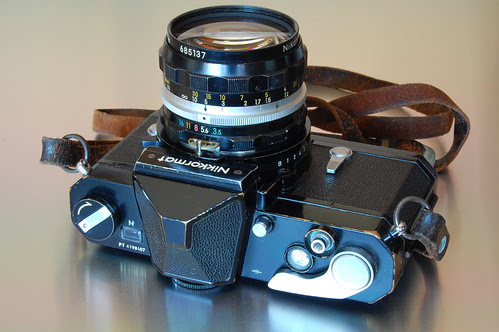 It was named Nikomat in Japan but, due to copyright claims from Zeis Ikon, in other markets, like Europe and the United States, they used the name Nikkormat.

The same happened with the name of the lenses, that even today, are Nikkor.

All the materials on this camera are metal. It's completely mechanical. The batteries are only necessary to power the match needle light meter.

Contrary to all other Nikon cameras the shutter speed selector is located on a ring behind the lens, and not in a knob on the top plate, as you can see on the above picture.

The shutter is a metal blade focal plane shutter, travelling vertically.
The speed range goes from 1/1/1000" and B.
The ISO range goes from 12 to 1600.
The metering system is of the centre-weighted, through-the-lens, type, 60/40 percent.

There are two flash sync sockets, one to electronic flashes, max. shutter speed 1/125", and another to flash bulbs the shutter speed, in this case, depends on the type of bulb.

The cold flash shoe is optional and mounted using the viewfinder ring to secure it.
In my opinion it ruins the looks of the camera. I never use it. 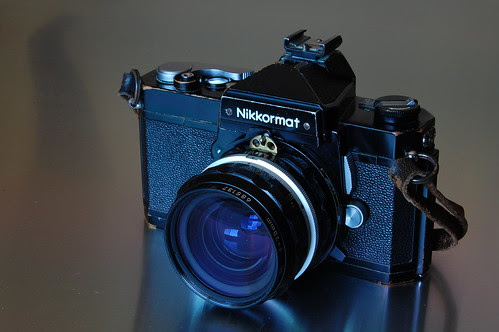 These cameras had a fixed prism and focusing screen with a 4mm microprism circle, surrounded by a 12mm matte focusing surface, the rest is a Fresnel lens.

It uses al the Ai and non Ai lenses from Nikon. If the lens has the prong to couple with the pin on the camera it can be used with it. 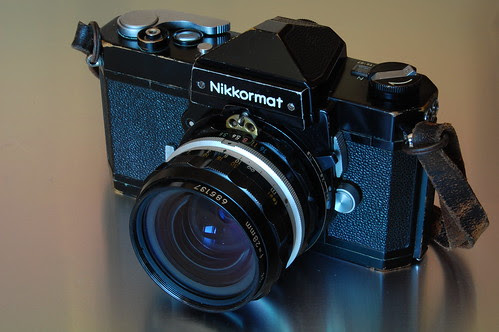