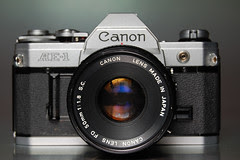 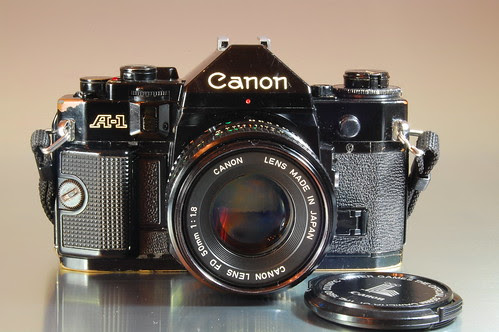 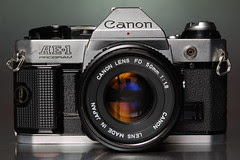 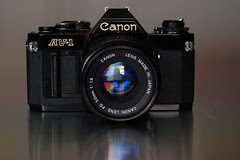 From the middle '70s into the '80s Canon produced this series of fine SLR cameras that I like to call:

It can be used in auto exposure, shutter priority, or manual mode, the light meter is monitored by a needle in the viewfinder indicating the aperture selected, in AE mode, or suggested when in manual mode.
The electronic controlled cloth shutter allow shutter speeds from 2 seconds to 1/1000 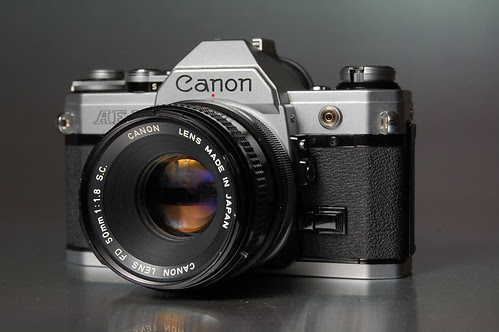 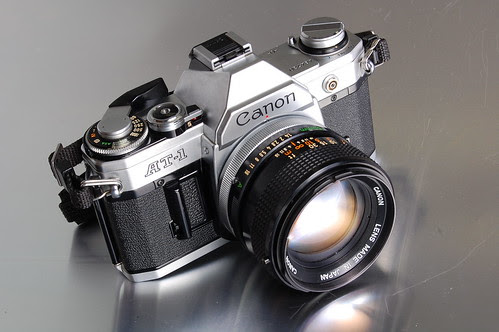 A less sophisticated version of the AE-1.
The auto mode is no longer available the exposure now is always manual by match needle method.
I got a very complete set with this one 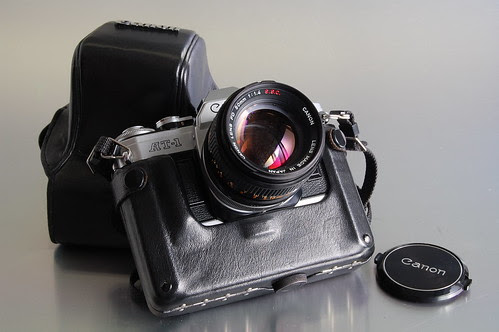 It came with a Canon FD Lens 50mm 1:1.4 S.S.C., a power winder A and this magnificent leather hinged case 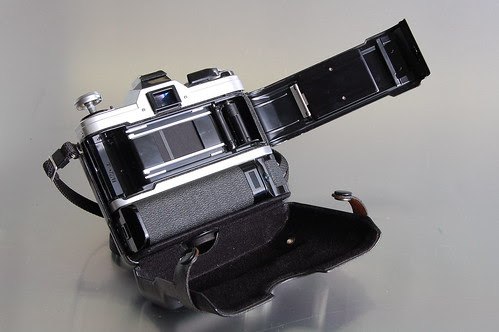 The case is hinged, on the bottom, to allow the film change without removing the camera from the case.

1978 was a great year for Canon, it was the year when they launched their flagship SLR camera the A-1 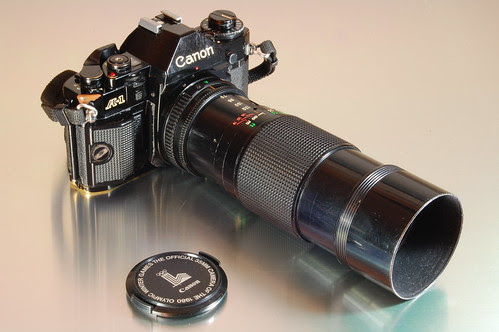 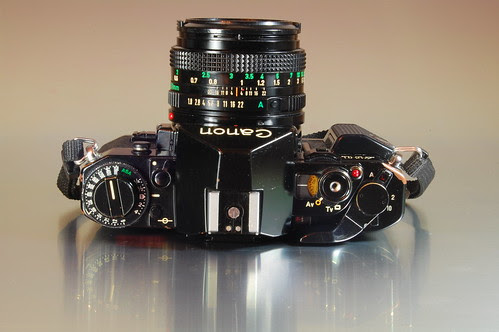 This is the most complete of them all.
It sports six exposure modes, five of them automatic: Aperture or shutter priority, programmed, stopped-down and electronic flash AE plus manual. 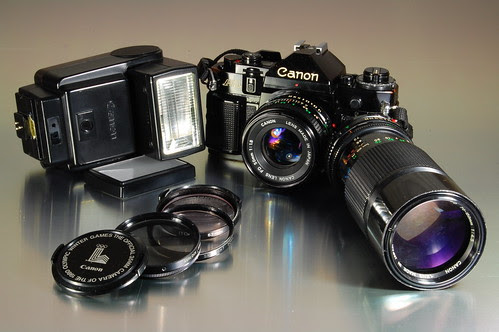 I got this amazingly complete set from my very good late friend Vitor Martins.

This was the first to present all the pertinent info in red led in the viewfinder.
Because of the commemorative lens cap with the Lake Placid 1980 Winter Olympic Games logo, I erroneously assumed that this was the 35mm SLR official camera of the event.
When I was gathering info to write this post I found that the 35mm SLR official camera was a Canon but, the F1-n and not this. 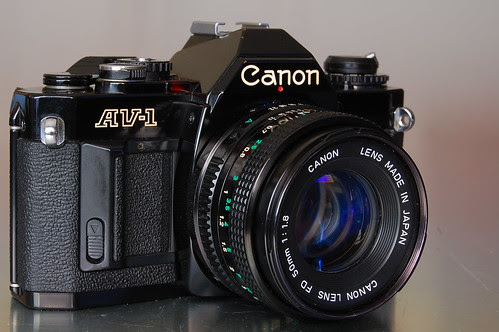 This was a camera that looked like an A-1 but is a very simple model with only auto exposure mode, aperture priority. 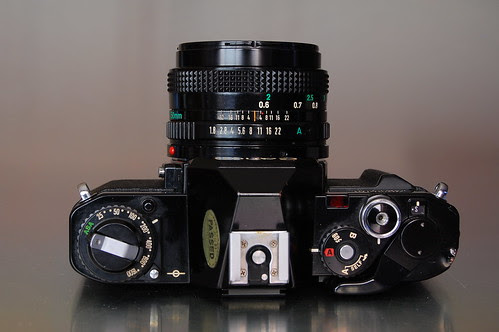 At last but, by no means the least, the AE-1 Program was presented in 1981 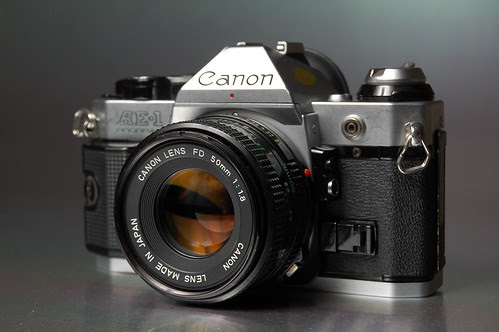 This is the Canon camera that most of the people of my generation wished for. 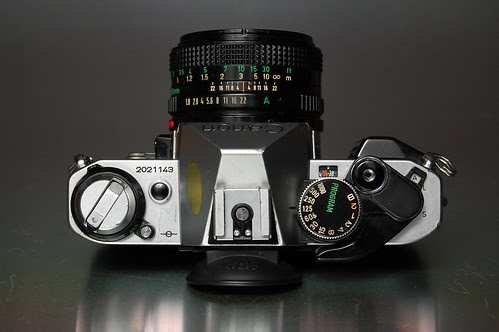 With AE program, shutter speed priority and manual modes it was the dream camera of all the serious amateurs and even many professionals of the '80s.

The lens mount is also the same, the FD.

FD lenses come in two flavours the FD usually marked as S.C., spectra coating, single coating or S.C.C., super spectra coating, multi-layer coating.
These are breechlock mounting by turning a chrome ring closest to the camera.
The other type is the new FD, the main difference is the bayonet mount, were the entire lens rotate until it clicks into place, to demount there is a button on the left lower side of the lens that must be pressed to release it.

All these cameras were produced in black/chrome or all black, except for the A-1:
The A-1 only dressed in black

Following some pictures taken with these cameras: 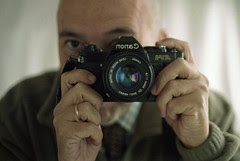 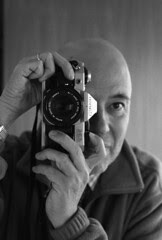 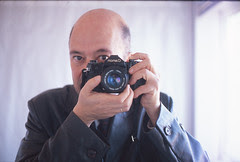 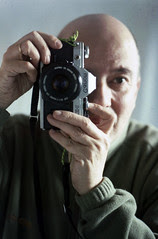 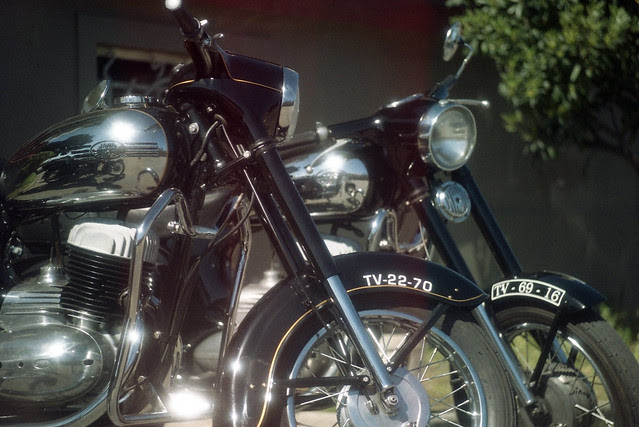 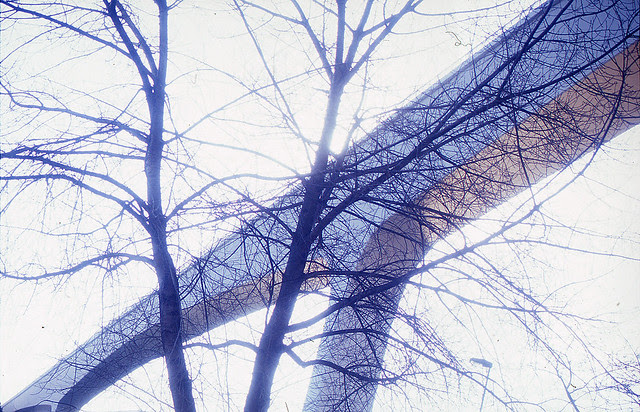 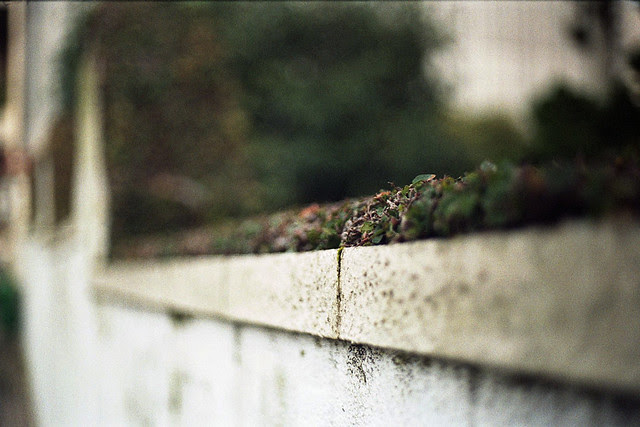