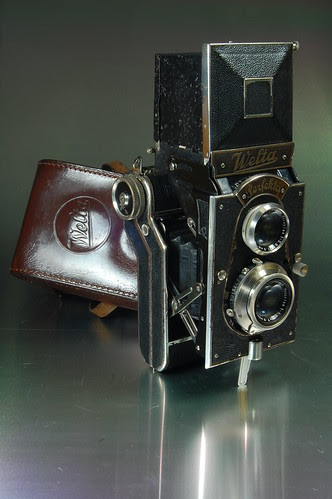 From an ad of the same vintage the description is as follows:
The "Perfekta" it's a twin lens reflex, but distinguishes from other similar cameras by its reduced volume: it's a folder.


Metal body, folding, leather covered, with leather bellows and finely polished nickel plated parts.
Focus by ground glass, by means of a second lens, Weltascope 1:3.8 or Trioplan 1:3.5, 75mm focal distance, solidary with the taking lens. A loupe placed over the ground glass eases the operation.
The lensboard, where both lens are mounted, is kept rigorously still and parallel to the film, by means of a patented device.
Great brand lens, solidary with the focusing lens with 75mm focal distance, Compur Rapid Shutter allowing 2 and 1 (B and T) time exposures and instant exposures from one second to 1/500 of the second.
The "Perfekta" uses regular 6x9 films of 8 exposures and the colour ones of 4 exposures, taking 12 exposures with the first and 6 with the second. The film is kept well flat by means of a plate spring.
A counter shows the number of exposures taken.
Film loading excessively simple and convenient, thanks to the Welta tilt trays.
Every controls are at hand reach. The apertures and shutter speed scales are visible from above.
The camera includes a tripod nut and a neck strap. It's delivered boxed, with a metal remote trigger, instructions manual, exposure table and Welta Photographic Manual.

This camera was a gift from my cousin Abílio Sá Dantas and it's working soundly. 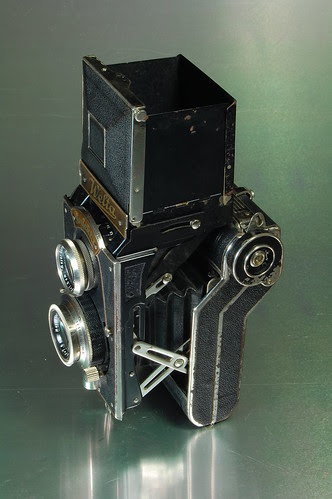 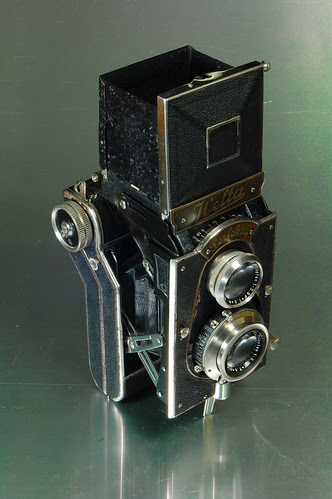 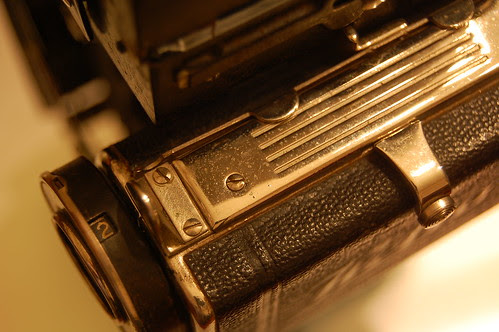 After loading the film and using the red window, on the back cover, to reach the number one this can be closed and from that point the frame counting is made by the camera counter.
After the 12th exposure it automatically resets to the number 1.
This was absolutely necessary in cameras of this era, taking 6x6 exposures, due to the back paper markings, at the time, were only for 6x9 exposures, in the B2 type of film, that was the name of the film that is now known as 120. 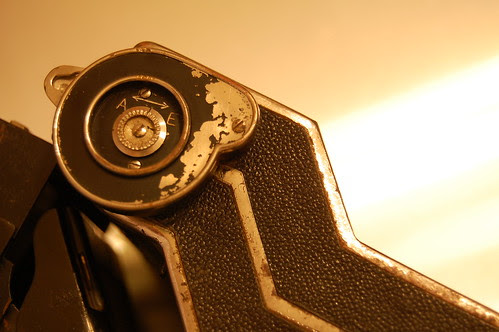 The counter is engaged in the "E" position. When reset it resumes the "A" position and the film can be winded to the starting position without altering the counting. Reaching the number one in the red window is time to turn the button to the "E" position.
I have no idea what the "A" and "E" means, if any German speaking reader can enlighten us we'd thank him.


The focusing and exposure controls are quite straight forward:
That big knurled knob acts the focusing lever.
The small lever on top of the tacking lens cocks the shutter and the one at eight o'clock position is the shutter release.
There are two rings around the tacking lens to select the aperture and shutter speed, both readable from above.
the two silver buttons, on each side of the lens board, must be pressed to disengage the struts and allow the camera folding.
The knurled knob on the top right is intended to raise the focus auxiliary loupe.


This camera was built in the early 1930's. This very ingenious format lacked acceptance by two reasons, its price, due to the complexity of it's manufacture, and the big bulge produced  by the reflex viewfinder. Although it was a folder it was, by no means, a pocketable one.

I know of two other cameras of this kind, the Welta Superfekta  and the Zeca flex.

A couple of pictures taken with it:

I've been asked about the serious look in the above picture. The reason is the same why our ancestors always looked very serious in those old pictures, it's very hard to keep a smile for several seconds, in the present situation eight.

It's a precious piece of photographic equipment and an example of dead end, format wise, in the photographic industry.

I take this opportunity to thank, once again, to Abílio.