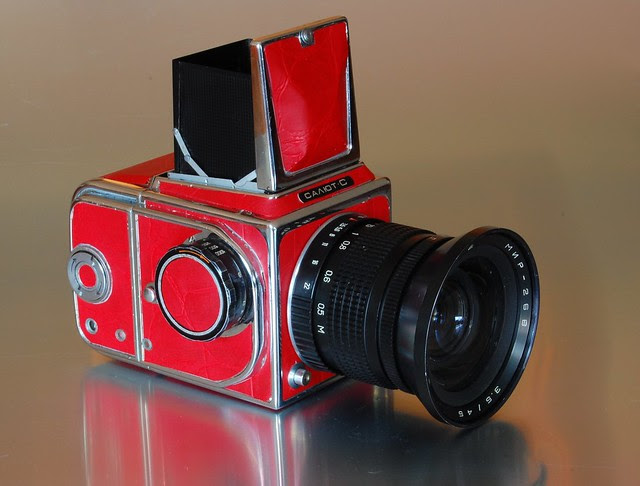 Salyut-S Background
The Cалют C aka Salyut-S / Salut-S / Saliut-S, poor thing this is enough to give it serious identity issues.
It was made in Kiev, Ukraine at the Arsenal factory, between 1972 and 1980. About 30.000 units were produced.

It's an Hasselblad clone, in the line of the 1000F, with a focal plane shutter.

The focal plane shutter uses metal curtains travelling horizontally. The shutter speeds range from 1/2" to 1/1000 and B, the shutter selector is a multifunction device, it also serves as film advance and shutter cocking.

The film is loaded in the magazines and, using the back window, advanced to the first frame.
The magazines and the camera have opposite tiny round windows, that might display a red or white colour, that have to coincide, when mounting the magazine, and stand for the state of the film, exposed or advanced, and shutter cocked or not.
The back window cover displays a film reminder.
The magazines use a metal dark slide, to allow mid-roll magazine exchange. One has to be very careful not to loose them.

It can be used with the waist level finder or with the metered prismatic finder.
I'm biased to the wlf, it's very good for low perspectives.


How and why I got it
This camera has some interesting stories.
The first one is about why I bought it. It all started when I bought a Kiev-6S (КИЕВ-6С), I'll tell about it in another opportunity.
I found in another auction a beautiful Mir-26B (Мир-26B) 45mm 1:3.5, wide-angle lens, with the Salyut mount.
Looking and finding an adapter to use Salyut lenses on a Pentacon Six was easy, that theoretically shares the mount with the Kiev-6S.
The camera arrived with it's Vega-12b (Вега-12 Б) 90mm 1:2.8, everything was perfect.
Then arrived the new lens and the adapter. The adapter didn't fit.
A few days later we had a photowalk an I asked un-exposed to bring his Pentacon Six.
Amazingly my Vega-12 b lens fitted perfectly his camera, his Biometar also fitted my camera, the adapter and the Mir-26B fitted the Pentacon Six(?)

Making a long story short I started looking for a camera for my lens and I found it: 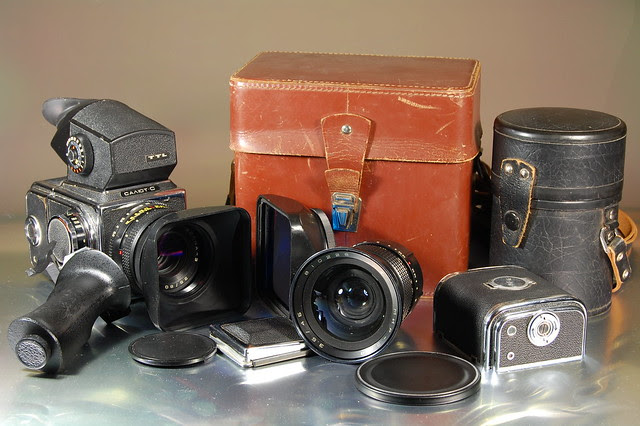 I included in the picture the Mir-26B.


How did it turned red
Now I had a camera for my beautiful lens, but I wasn't very pleased with the looks of the leatherette covering the camera and decided to make a complete makeover.

First I striped all the leatherette and removed all the old glue, using acetone.
Yes I slept soundly after that, although I had some funny dreams. 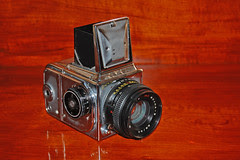 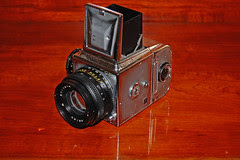 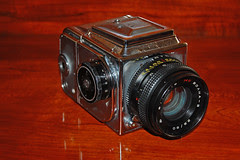 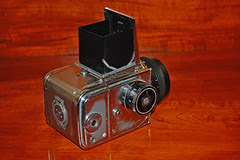 Then I found some, self-adhesive, red faux crocodile and used it to cover it: 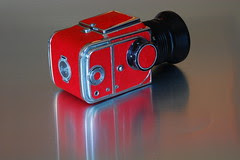 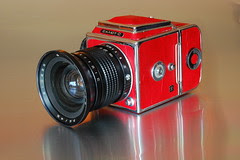 That's how I got my Red Salyut.
I thought it was appropriate, giving its origin and the period when it was made.
This is a commie camera and it's proud of it.

As a photographic instrument is kind of unpredictable, I blame the shutter.
Maybe one day I'll send it to Arax, for another makeover, this time a mechanical one.

Anyway, when she is in one of her good days the results fully satisfy me 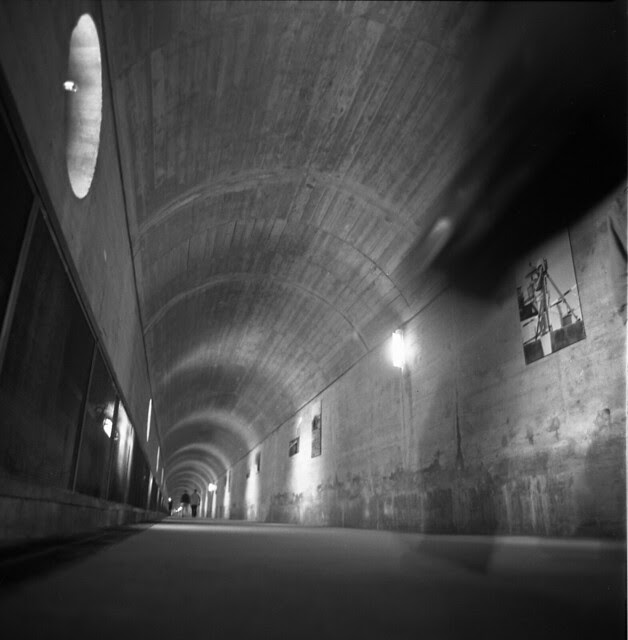 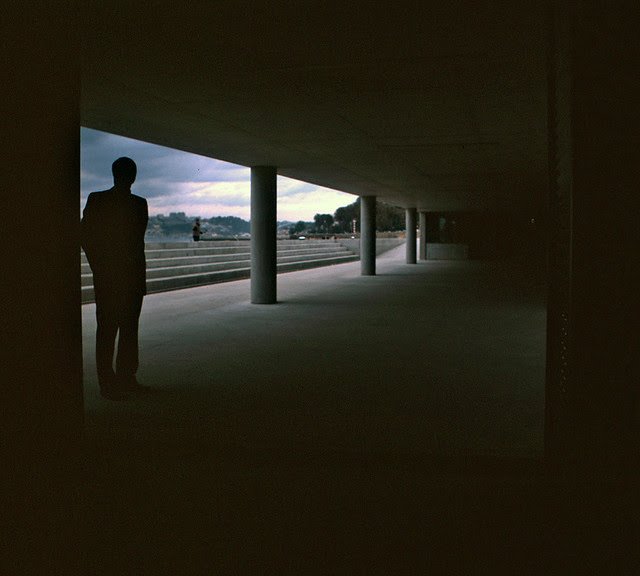 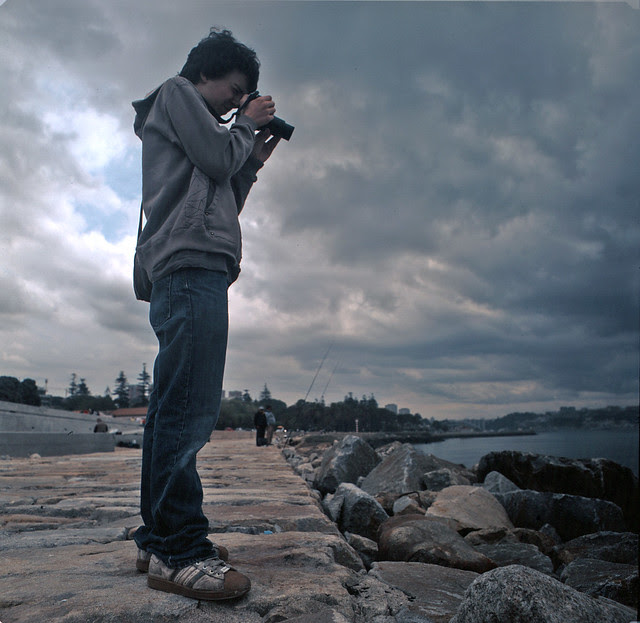 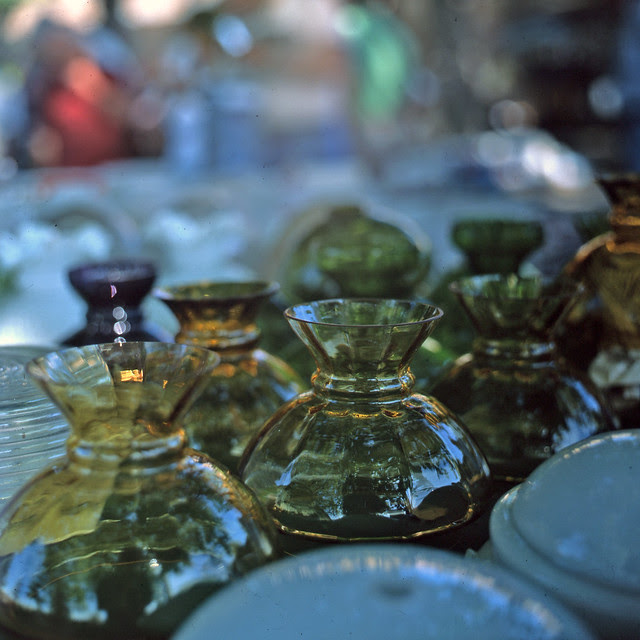 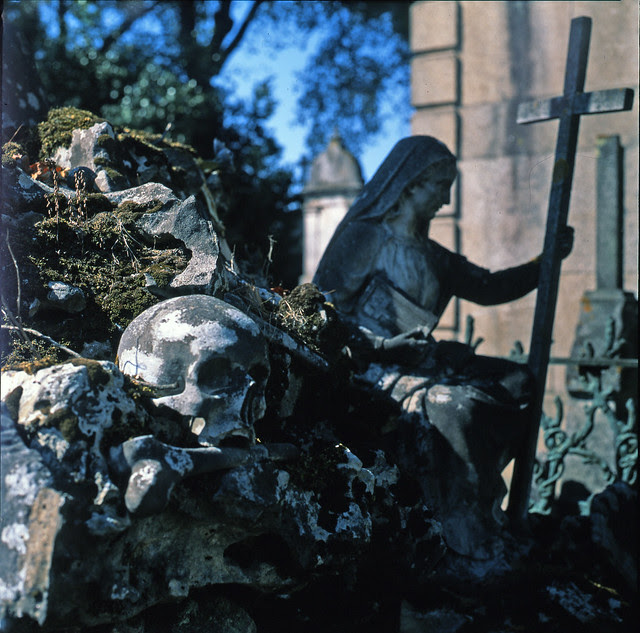