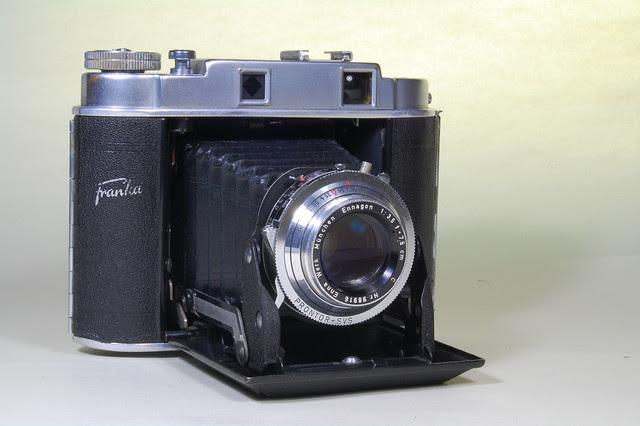 This was one of the first folding cameras I bought. The range finder was non-operational. I send it to repair, it was a loose mirror. Later when I gained more confidence in my mechanical skills I made a complete CLA to the range finder, that was quite misaligned vertically. Now it's great.
On this one the lens is an Ennagon 75mm, 1:3,5, from Enna Werk, München, on a eight speed Prontor-SVS shutter, 1"-1/300 and B, with self timer, V, and two flash synchro positions  X and M.
I have an anecdote about this camera:
The other folding cameras I had, when I bought this one, in order to fold I had only to force down the struts.
When this one arrived I opened it and was incapable of closing it. I turned it upside down, looked everywhere but to no avail.
I handed it to my wife, not telling her about my difficulties, and asked her to close it. What she did, to my complete surprise, immediately.
As she picked the camera, she saw at once the silver button, under the lens, that must be pressed  to unlock the struts.
It was a good laugh afterwards.
In the picture above you can see the distance indication of the range finder, the red dot warning that the film is advanced and the camera ready to shoot, the shutter release and the advance knob, that includes a film reminder.
I love medium format folding cameras. They allow me to always carry a medium format on my pocket.

These cameras were made in Bayreuth, in the Black Forest, by Franka-Kamerawerk.
These are post war cameras marked "Made in Germany US Zone".
They were manufactured around 1954.
This is a sharp shooter:
Posted by RaúlM.