Every now and then my friend Hugo dares me for a trade, this time it was a Zeiss Ikon Contaflex IV

He sent me the above photo with the following description: "the body is average, but the lens is quite loose and has many fungi, the case is broken in two"

We made our trade arrangement and, in the following weekend, I attacked the 'beast'

I striped it almost completely to find out why the lens was that loose, it shaked and rattled, also to clean it thoroughly. He was not kidding, all the lens surfaces had fungi and a lot of them. The mirror and prism were in need of a good cleaning too.
So, as you can see above, it all came off.

I found the culprits on the looseness of the lens:

As you can see above, marked with an A, there was a loose screw inside and, marked with a B, this screw was very loose too, this one doubles it's action as focus stop.


Now I'm going to show you a step-by-step reassemble of the camera:


All the parts clean and ready to reassemble

The prism ready and in position

The next images show you the assembly sequence

Film back and spool

Some pictures of the finished work 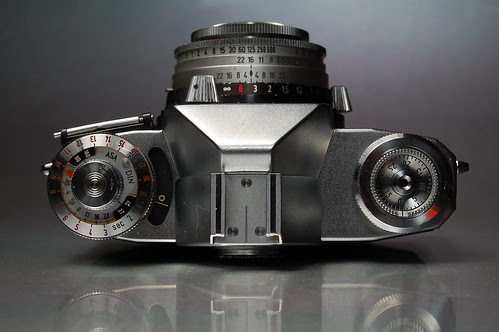 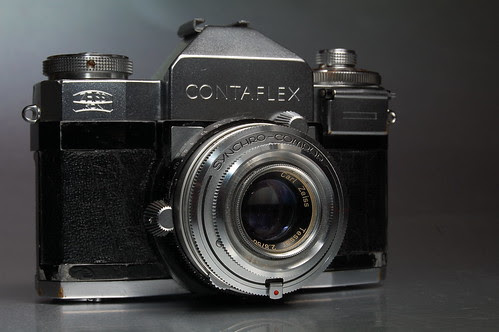 Looking at this you might think it was piece of cake...
How wrong you can be!
I didn't count the time but it took looooong. Especially the retrieving of the missing screw and putting it back into place, it was almost impossible to reach the place without disassembling parts that I didn't want to.
Then the positioning of the shutter assembly is quite a critical operation, if not performed correctly it fires when you loose the shutter release and not when you press it.
The calibration of the focus range was a very time consuming trial and miss operation.

When I gave it as complete, I loaded it with film and was going to change the front element of the lens, I have also the 35, 85 and 115mm, it was stuck... the lens wouldn't come out...
I had to start all over: disassemble the lens/shutter assembly, from the back, it came all out including the focus assembly and do it all over including the focus range tuning.
All due to a misplaced wire spring that locks the front element lens.

Now it's great, even the lightmeter seems great, comparing it with my D40. Soon there will be pictures and a review of it.