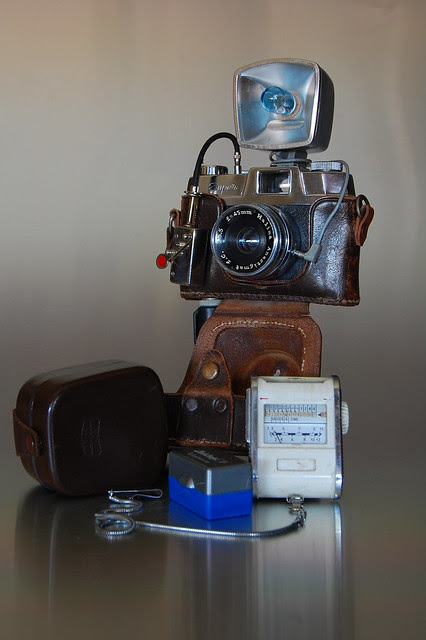 This outfit, plus a telescopic black and chrome tripod, with a ball head and a clever reversal bush for 1/4 or 3/8", neatly tucked in a gray square patterned bag, made by my mother, were my father's companions in all our family trips, parties, etc.
When I started collecting cameras my father gave it to me, on my birthday, as he was no longer using it.
Wait I'm getting ahead on the chronology of the facts.
When I started collecting cameras I decided to recover all the cameras that I have had or used intensively.
This Halina 35X Super was the first 35mm camera that I ever used but, it belonged to my dad, so I went to the Bay to get a replacement for it and I bought this one: 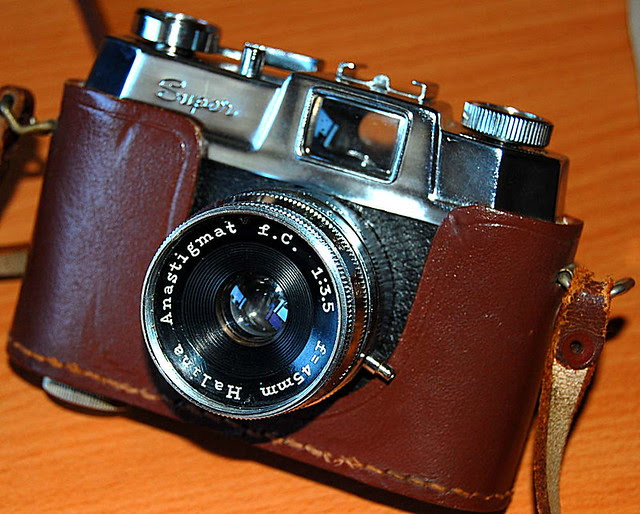 This camera was made in Hong Kong, it's marked Empire Made, from 1960 onwards.
It's a very simple viewfinder camera.
Halina Anastigmat f.c. 45mm 1:3.5 lens
Scale focusing
Central leaf shutter: 1/25, 1/50, 1/100, 1/200 and B
Film advance and shutter cock combined
Exposure counter on a wheel in the centre of the advance lever
Removable back to load/unload film
Film rewind by round knurled knob
Flash PC synch on the side of the lens barrel

I don't have much to say about this camera, I never used it.
I will leave that to the post were I'm going to tell you about the "original", the one that my father gave to me.

My father never liked the more modern cameras that I've been giving him through the years, so he asked me to get him a camera like the old one, that he liked so much and was used to, so now he's using this one.