A chain of events

In the summer of 69, no that's Brian Adams, by the way at that time he was living in Portugal, in Cascais.
OK, we had the humour and the trivia, let's get to the serious business.

I was already very familiar with the pseudo SLR cameras from Fuji, I have had a Finepix 4900, a S602 and I still have a S9500 but, this was my first digital SLR.

It was sold to me by my very good friend Berto Pinto, that lead me to Ken Rockwell's site, as a very good source of information about my new camera.
So I did, the site it's great. I found every piece of information I needed and don't need about my camera and everything else.
I became a fan of the site and went back regularly.

Let me remind you of something: at the time I had my D40, the Finepix S9500, my last film camera, the Olympus IS2-DLX, the Nikonos gear, my late father-in-law's Canon P and my first camera the Ferrania 1014.
I thought I had to many cameras. How wrong was I.

As I went reading, Ken kept drilling into my head, that if I wanted to take great pictures, I needed a medium or large format camera.

Note, I was perfectly satisfied with the pictures I was making with my D40 and still am. Although nowadays I use it to take pictures of my growing camera collection and to record the repairs I make, very useful when I'm reassembling.

So I went to my parents house. I knew that my father had a bellows MF camera.
He lent it to me. I had never used a medium format camera before. I took it home and the next day I went  to buy a film for it. At the shop I explained what kind of camera I had and the shop keeper sold me a 120 BW film, that I was unable to load to this: 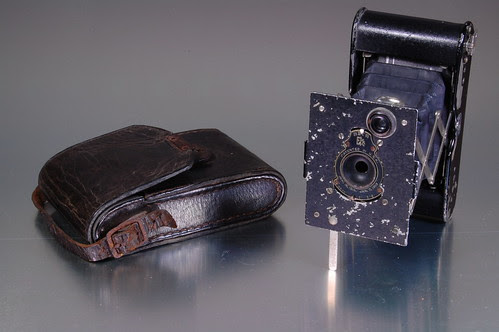 what now is evident to me, this is a 127 camera, a Vest Pocket Kodak Autographic, I'll tell you more about it in another article.

As it was very difficult, almost impossible, to get film for the camera, I had to get a camera to use that film.
That's when I turned to €bay and got my first 120 camera a Yashica Mat-124.

I got infected by GAS and two years latter and two hundred, plus, cameras, I'm here writing to you about them.

Next: How I got 127 film for the VPK and how I fell for that format.